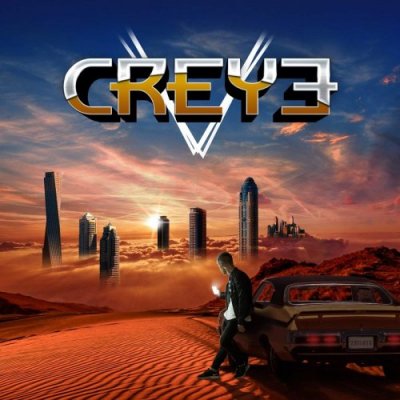 Early in 2017 I heard about a new project that was releasing an EP soon thereafter. The group was called Creye and it piqued my interested right away because, one, it was melodic rock and came out of Sweden and that, as any fan of this genre knows, is just the breeding ground for great melodic rock these days.

Two, it was the brainchild of Grand Slam guitarist Andreas Gullstrand and I am a big fan of that bands 2016 album ‘A New Dawn’. Now I will admit that I did not know the extent of Gullstrand’s involvement in the writing of that record but I knew I liked the album and I knew that the guy could flat out play.

And lastly it contained the vocals of Alexander Strandell and I am a very big Art Nation fan.

So, armed with only that information, I placed an order for my copy of the EP and when it arrived I tore into it and popped it into the player.

That EP was called ‘Straight To The Top’ and it contained three tracks; two original songs (which have been re-recorded and are included on this release) and a cover of Robert Tepper’s classic ‘No Easy Way Out’. All three tracks were fantastic but the two original songs really showed what kind of music Gullstrand was able to write, and it was fabulous!

I loved the EP and after hearing it than I asked Andreas about the possibility of interviewing him. He kindly agreed (you can read that interview here) and through that I learned that Strandell was only the voice for the EP due to his commitment to his own band, Art Nation, and was not going to continue on with the band full-time so they were looking for a vocalist who could give them the full attention needed to front a band, which was the plan all along.

Not long after the announcement that he would be coming on board as the voice of Creye, I had the pleasure of interviewing Robin (you can read the interview here) who was very excited to start this new chapter in his career.

Well, as anyone who has heard any of the three singles from the album already knows, Jidhed was the perfect choice for the band. The apple didn’t fall far from the tree in this family as he has a simply fantastic voice!

Robin joins Andreas, bassist Gustaf Orsta, keyboardist Joel Ronning and drummer Arvid Filisson and he fits in great with the band. His voice was made for just this kind of melodic rock and blends superbly with the band and the music.

Soon after announcing their new vocalist, the band announced that they had been signed to, you guessed it, Frontiers Records srl out of Italy. If you have not heard of that label than you are on the wrong site. Frontiers has been at the forefront of melodic rock for many years now and releases one great album after the other so this was the perfect home for Creye.

At the news of a full blown album from the band I was stoked and it could not get here fast enough.

The first single, ‘Holding On’, was released all the way back in May of 2018. The record did not even drop until October. Talk about a tease! And it was a freaking awesome song too!

But we had to wait.

And wait for the album.

Fortunately we had two more singles reach us during the wait and again, both were simply superb!

Now the album really could not get here fast enough to suit me.

It finally did arrive though and as soon as it did than I wasted no time in giving it a spin.

And it blew me away.

It is a keys driven album and anytime I hear a lot of keys in a record I start to worry because, while I love keys in a song/album, overdoing them can ruin what would otherwise be a great record. Fortunately those keys, while always present and prominent here, are never overdone and they have been mixed in perfectly with the other instruments, that all sound amazing as well. These guys can play! All of these guys are top notch musicians and they all blend wonderfully on the album. Production is terrific and, as mentioned already, Robin sounds fantastic and Andreas is on fire both on the guitar and with his writing.

The songs are outstanding!

‘Holding On’ was the first single released from this album back in May of this year, as mentioned, and it is a good taste of what is to come with the rest of the album. A very upbeat, keys heavy throwback to the AOR of the 80s. Still loving this one. You can hear it by clicking on the associated link under the Media heading near the top of the page.

‘Nothing To Lose’ is a very strong track and one of my favorites. This one has Robin showing off his vocal range and he sounds fantastic.

‘Different State Of Mind’ was the third and final single to release and you can see the music video for it under the Media heading as well. This is an absolutely wonderful song and it is, in my opinion, the best song on the record. One hell of a catchy chorus. I love it!

‘Never Too Late’ is the first of the two original songs that were on the bands EP in 2017. This time, of course, we have a new singer performing it and, with big shoes to fill from Strandell, Robin proves he is up to the task and nails it.

‘All We Need Is Faith’ and ‘Miracle’ slow things down a bit for us with two great, mid-tempo tracks before ramping things back up with a fantastic chorus that will be stuck in your head after hearing in the utterly superb ‘Christina’. This was the second single to be released from the record and it is one damn catchy song. Excellent stuff!

‘Straight To The Top’ is the second of the two original songs from the EP of the same title. I still love this one and it has a beat and melody that just begs for a Summer’s drive with the windows down and it playing at full blast.

‘Love Will Never Die’ slows it down a little once again, this time for a terrific mid-tempo ballad that leads into the driving rocker ‘Still Believe In You’ and the upbeat ‘City Lights’.

‘Desperately Lovin’’ is another excellent, catchy rocker that takes us to the last song of the regular edition of the album. ‘A Better Way’ ends the album on a high note with a great upbeat track.

The import edition of the album has an acoustic version of ‘Straight To The Top’ as a bonus song. I love the original but this acoustic version brings a completely different feel to the song, taking it from the rocker it originally was and turning it into a beautiful, piano backed ballad that really showcases Robin’s vocals, which sound amazing here.

I had very high hopes for this album after hearing the EP and then the three singles from it. I honestly had my doubts about whether the guys would be able to keep that same strength and momentum throughout the thirteen tracks, but I am here to tell you that they pulled it off! It is a simply wonderful, keys-driven, melodic rock gem.

If you enjoyed any of the three singles released or the EP from last year than grab you a copy right away because it is a must-have in my book!

Creye is a band to watch because these guys just knocked it out of the park with their debut record and onto my list for one of the best records of the year.

‘A Different State Of Mind’.

‘Straight To The Top’.

‘Still Believe In You’.

‘Straight To The Top’ acoustic version.