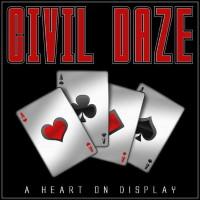 ‘A Heart On Display’

Civil Daze – ‘Face Down In The Dirt’ lyric video.

Now this was one pleasant surprise for me. I love female fronted hard rock acts from the 80s like Vixen, Femme Fatale, Saraya, Witness, etc. and while there are several fantastic female acts out there today doing a damn fine job and putting out wonderful music, there are not many that spring to mind that are putting out music that is really reminiscent to those acts from the 80s.

This Swedish band has released an EP and it is one hell of a great effort. The band states that acts such as Vixen and Heart are their influences and while you can certainly hear that influence in the music I would say their own sound is more akin to perhaps Witness or Saraya, which is not a bad thing!

I am not a fan of EPs, you typically end up paying close to the same amount for them as you do a full record and often times a band just ends up adding those exact same tracks onto their next album, which sometimes is mere months after releasing the EP. I am also not a fan of digital only releases. I am old school and still want to have the physical copy of an album in my hands with the booklet and pictures and all. But when it is a new band than I certainly understand the reasoning behind releasing a digital EP over a full length album at first physically. It costs less obviously and can be a way for a band to get their music out there, gauge the reaction, see what is working and what isn’t and perhaps grab the attention of a label somewhere. So I have no problem with an EP from such a band or a digital release, and when it is this good than I have no problem whatsoever!

From the opening groovy rocker of ‘The Right Kind Of Loving’ to my personal favorite, the very catchy ‘A Million Miles Away’ and on through the next three outstanding tracks, ‘A Heart Of Display’ is perhaps the best EP that I have had the joy of hearing in many years.

To be quite honest I know very little about this band, hence the reason this review is so short, but I know that as soon as I heard this EP than I knew that I HAD to write something and share this beauty. The songs are fantastic and very catchy. The vocals of Helena Sommerdahl are superb. Actually there is nothing that I dislike about this EP save that there is not more here.

If you like female fronted rock that borrows heavily from the 80’s than do yourself the absolute pleasure of getting this one straightaway.

Very highly recommended! I can only hope we will be getting a full length album from this band in the near future!